William Wyon (1795 -1851) was invited to design the Society’s first medal and he produced the well known design that is still used to this day. Wyon was a member of a family of renowned seal engravers and medallists and the chief engraver at the Royal Mint. There was a delay in obtaining the first medals because, when work was well advanced in June 1843 the obverse die broke owing to a flaw in the steel and Wyon fell ill, and it was not until 1844 that the Society received its first supply.

Previous Versions of the Marine Medal

During the lifetime of the Marine Medal, which has a blue ribbon, there have been three versions struck. Examples of the first and third type are known to exist in Gold but so far there have been no sightings of the second type in Gold. The silver version was introduced at about the same time. 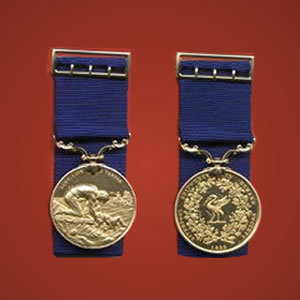 The first version of the medal, “Type 1”, has undergone the most changes since its introduction. It began life in the form of a Medallion of 56mm in diameter. Three styles of the medal are known to exist:- (i) what the Society calls its 1st class medal which is frosted and glazed, (ii) the 2nd class medal which is polished and glazed, and (iii) the 3rd class medal which is polished and unglazed. To the best of our knowledge they were all made between 1840 and 1867. Details of the actual rescue used to be engraved on the rim that holds the glass in place on the Glazed Medallions, but not on the Medallion itself. In contrast the unglazed version has the details engraved on the rim of the Medallion.

The obverse of the medal has the figure of a sailor kneeling on a fragment of a wreck rescuing a child and its mother from drowning. In the background the crew of a boat can also be seen rescuing someone else from the sea, and in the distance there is a sailing ship. The inscription around the top third of the medal reads “LORD SAVE US: WE PERISH” and at the base is written “W. WYON, R.A.”

The reverse side has a wreath of oak leaves made from two branches with a hen cormorant in the centre with wings extended and bearing an olive branch in its beak. The bird was copied from the Liverpool Borough arms and is the “Liver Bird” which sits on top of the Royal Liver Building at Liverpool’s Pier Head. Between the design and the rim and fully round the circumference of the medal are the words “LIVERPOOL SHIPWRECK AND HUMANE SOCIETY 1839”.

Other medals were made for the Society by William’s eldest son Leonard Charles Wyon (1826 – 1891) in 1862. It is not recorded which medals they were, but judging by the date, they were probably of the Oval Marine type.

The exact date of the introduction of the Society’s first “medal”, as opposed to the slightly larger  “medallion” is not known; however the Committee considered estimates for one in January 1861. The earliest known medal bears the date December 1867 and the latest known medal September 1874. The medal is oval in shape and measures 46mm from top to bottom and 38mm from side to side. The ornate suspension has a riveted claw to which a Liver Bird of 16mm height is attached by a hinge. Balanced on the bird’s head and wingtips is a straight bar slotted to take a 28mm wide ribbon.

The obverse is similar to the Medallion. The manufacturer’s name Yates & Hess is in place of W. Wyon, and within a 5mm border is the name of the Society and the date. The reverse has a similar wreath but in place of the Liver Bird there is a blank space to engrave the recipient’s name and the date of the rescue. The Society’s name is omitted. The edge still gives full details of the citation with the exception of the recipient’s name.

The last major change to the Marine Medal was made on 27 January 1871 when J. Mayer & Co. won the contract to make medals for the Society. They had been in competition with Elkington & Co. and Warrington & Co. both of whom struck medals for the Society at certain times. The medal now became smaller in size being approximately 38mm in diameter. It subsequently underwent several die type changes but has since remained true to this design. The alterations involved the method of suspension, the detail of the moulding both obverse and reverse, the thickness of the medal flan and the manufacturer. They may have been the result of changes in the manufacturer and in each case the dates of the changes are not recorded.

The Oval type medal was in process of being replaced about 1872 but the date of alteration is again not recorded. However at about the same time as this third type was introduced, the Society also decided to introduce a Bronze Medal in addition to the Gold and Silver Medals which were the only types the Society awarded prior to 1874. 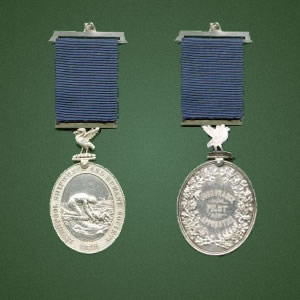 Numbers Awarded:     To 1st July 2016 the recorded totals of marine medal and medallion awards are:- Gold 66 and Gold Bars 7; Silver 2,503 and Silver Bars 239; Silver “In Memoriam” 51; Bronze 2,065 and Bronze Bars 37; making a grand total of 4,968 medals awarded for conspicuous gallantry in saving or attempting to save lives at sea or in rivers, lakes, inland waterways, etc. Since World War II, when the last Gold Medal was awarded, all subsequent medal awards have been either in Silver or in Bronze, and the Society no longer holds any stocks in Gold.

Some interesting gold medal awards:    There have been only three solo awards of the Gold Medal made, all for rescues on the River Mersey. The first was to Ferry Captain William Thomas Bloor in 1876 when he received his medal and a Gold Bar. Already the holder of the Society’s Silver Medal and six Bars, he was involved in several rescues over a twenty year period and was thoroughly deserving of an award. The second was awarded to Ferry Inspector Thomas Walker in 1891. He was also frequently involved in rescues and was already a holder of the Society’s Silver Medal and six Bars. The third and possibly the odd one out, was awarded to Assistant School Master Eyton Pritchard Owen in 1893 for rescuing one of three boys trapped on a sandbank at Crosby. The boys were not identified but the rescued boy is thought to have come from a prominent Merseyside family.

Probably the most famous of the 66 Gold Medals was the one awarded to Captain Arthur Henry Rostron for his action on 14th & 15th April 1912 as the Captain of the “RMS Carpathia”. He won one of nine medals awarded by the Society to the crew of the “Carpathia” for the “Titanic” incident; the other eight being Silver Marine Medals. All the Gold Medals awarded to deep-sea rescues were to Ship’s Captains who showed fine seamanship and professionalism of the highest order. Three Gold Medals were also issued as a result of enemy action during World War I and the last was awarded as a result of enemy action during World War II. 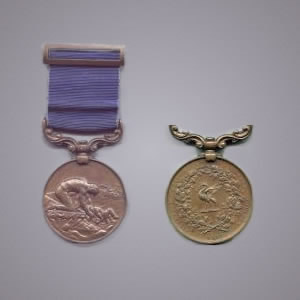 Click nominate anyone who has carried out/undertaken an act of bravery, or to nominate an organisation or individual in the North West region who have or has made a significant contribution in the previous year.

Awarding people who voluntarily put their own lives or safety at risk save others.